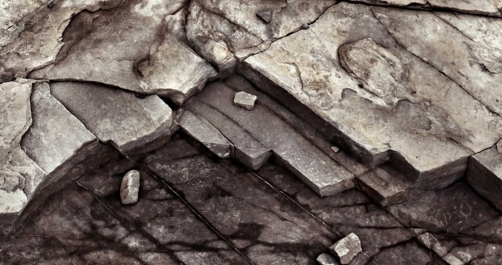 I recently received an email from a good friend of mine in Arizona who also happens to be a materials supplier for our industry. A homeowner contacted him about having a granite countertop repaired, and asked if there was anyone he could recommend. Since I live about an hour-and-a-half away, I got the call.

I sent the owner an email, requesting some reference pictures and a detailed description of the situation. I couldn’t believe what he sent back; it detailed the worst seam “repair” I’d ever seen.

It involved Antique Brown granite, which doesn’t allow any room for error due to its dark color and extreme deep gloss. Someone made a very poor attempt to grind the seam edges down to create an equal plane, eliminating lippage at the seam.

Saying that it looks bad is an understatement – I actually laughed when I saw it. Not only was it wavy; it had no shine whatsoever. It was what someone called their finished product before they asked for the check.

There were half-moon gouge marks from a grinder skipping across the face of the stone; the seam was chipped horribly. It was obvious that whoever tried to make this repair didn’t have any idea what they were doing.

I told the homeower that I could definitely make it better, but making it perfect would be questionable due to the severity. I told him my price; since I would be in that area visiting family within the next few weeks (and if he could wait that long) I wouldn’t charge him the driving time. We agreed on the price and set up an appointment.

When I got there, I quickly realized this repair wasn’t just bad; it was ugly. The front sink rail had the same sad attempt for repair on both sides. It was apparent that the sink rail had broken off during some point prior to installation, and they glued it back together. It was glued together well, but it was also wavy and had no shine.

I politely informed the customer that I wasn’t previously aware of the sink rail, and that I needed to adjust my price. He agreed without hesitation; he’d been living with this for three years and finally had enough. I went out to my van and brought my tool box in the house, along with a new set of abrasives I was excited to try out.

The Phantom SL3 is a brand new system from Kris Jorgenson, the creator of the Seam Phantom. It consists of a set of rigid resin diamond pads and a trick-looking anodized quick-release backer that can also accommodate other tools in the SL3 system, like a 4” rigid hook and loop backer. It’s milled from aluminum and balanced; if you ever have a wobble or vibration, you know it’s not coming from the backer.

I marked my lines to contain my scratch pattern area, sprayed some water on the surface, and started cutting with the 300-grit pad.  When dealing with something that’s already been torn apart like this, you don’t want to start with a pad that’s too aggressive.

Because the surface was so damaged, I couldn’t tell exactly how low the other person went into the stone. With this particular job, I knew there was a possibility he just ruined the surface without going too deep, so I started with something that would cut well without being too abrasive.

I made a few passes, and then dried the area to check my progress. My heart sunk as the stone dried up and I could see all the low areas that were created. Low areas are a bad thing; when you start chasing them, you create waves or dimples in the stone.

I decided to take my first cut out to a wider area. This meant working longer over a much-larger area, but the results are worth the extra work. I made several more careful passes, constantly drying the stone and checking my work.

Finally, I got a nice, even, consistent scratch pattern with no low areas. Now I just had to make sure I didn’t create a dip in the stone.

At this point, I went to the 500 grit. At this point, your objective is only to remove the scratches from the previous pad with your new pad, while keeping a consistent pattern to prevent rippling. I focused first on the outside edges of the scratch pattern to make sure they blended well with the middle. I made several passes over the middle, then dried the area and inspected the progress.

You want to make sure the entire area you’re working is consistent, with no variations in the clarity or shine (if there is any) throughout the entire scratch pattern.

If variations still appear, you need to spend a bit more time in this area. Each step is critical: If you don’t deal with scratches now, you can’t remove them later. You’ll end up starting all over again, which is no fun.

The 500 grit looked good, so I moved on to 1000. I made my passes from the inside out and checked the progress. At this point, the clarity is crystal-clear and a nice shine is developing. On to the next step: flexible resin pads.

Switching the process halfway through is the key to the end result for me. Some do it a different way, and that’s fine. There are several ways to achieve the proper results; this is just the way I prefer to go about it.

At this point, I’m done with rigid resin pads. Along with changing to Alpha® Ceramica resin pads. I also change machines, using a Milwaukee 5540 polisher for the second half of the process. The Milwaukee allows you to slow the RPMs by how much pressure you are putting on it. This enables you to keep a tremendous amount of friction with slow RPMs, giving protection from burning the stone.

I misted a small amount of water onto the area and started polishing. I pushed as hard as I physically could and waited for the water to dry up. As the water dried, it created lots of friction, with the polisher grabbing very hard. I continued to push down and fight through it until I felt I’d made a sufficient increase in shine. (The difference between the 1000-grit turbo-style rigid pad and the 1000-grit Ceramica pad is almost literally night and day).

I continued through the next two steps, ending with the 3000-grit pad. With some stones you can actually match or beat a factory finish at 1000 or 2000; in this case, it came at 3000, with no buff pad necessary. Sometimes, a buff pad can actually do more harm than good, as it creates far more friction than the rest of the resin pads. You have to know when to stop.

To touch up the seam, I used CA (Cyanoacrylate) and created a surface that could not be detected by feel. After cleaning, the homeowner looked over the job; he immediately gave his very happy approval.

He admitted to hiring the cheapest contractor to install the job, and now realizes the significance of hiring someone to do it right. I undersold the job and over-delivered, which is never a bad thing.

This goes to show that shopping on price alone can leave you in a bad situation, and you may end up paying more to fix it than what it would have cost you to do it right the first time. Atrocities like this, though, can be fixed with the right training and patience.

MilleStone Marble & Tile, Inc. is an industry leader in marble and tile installation, design and restoration. 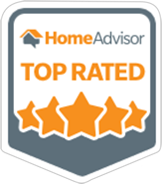 MilleStone Marble & Tile, Inc. is licensed and insured. Our license qualifies us to do business in C54 and C29 classifications. Contractors License Number 837503.